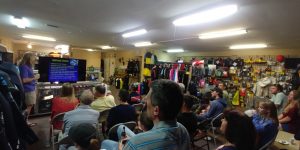 If you weren’t able to join us Friday for From Sea to Space: The Final Frontier, you missed an interesting discussion with Joseph Dituri, PhD, DMT, CDR – US Navy (ret) on the similarities and differences between astronauts and deep-sea/technical divers.

The History of Astronaut Selection:

Not only did we learn about some of the similarities between astronauts, or “nauts” as Dituri calls them, and aquanauts, we also learned a lot about the history of early astronauts and how the requirements have changed as history has changed. For example, Jerrie Cobb was one of the only astronaut candidates who went through rigorous testing, performing within top 2 percent of all candidates but never went to space. History has changed the way that we have made decisions and the way we have selected candidates. Dituri said, “nowadays, they are looking for inclusion instead of exclusion.” NASA finally flew their first woman astronaut in 1978. 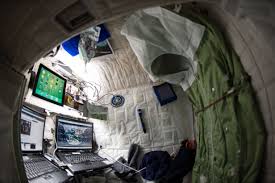 Dituri talked about several qualifications required in the selection process for astronauts including:

How it Compares to Deep-Sea Divers: 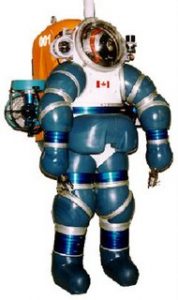 What was discovered by Dituri, although he mentions that he is biased, was that astronauts and deep-sea divers have a lot of these qualities in common. “We have to go through a lot of the same training and we have to be able to exist in small quarters with each other. A great example is decompression. If you can’t get along with the same person, you either learn to ‘let it go’ or to mention it right away. You can’t just go for a walk or go to the surface if you get mad,” he said. Dituri compares the Aquarius Reef Base, located in the Florida Keys, to some of the space station environments.

Not only are deep-sea/technical divers exposed to the same training and psychological environments as astronauts, the training is conducted in water. “In water, you can lift heavy objects, you have some similar procedures and operations, you wear similar exposure suits and they even examine mockups of space stations underwater to simulate living conditions,” Dituri said.

Deep-sea/working divers are susceptible to many of same physical conditions as astronauts including musculoskeletal training, psychosocial preflight prep and sensory depth perception, Dituri said. “We also have a lot in common with the nauts when it comes to sense of time. No matter what has happened at the surface, we’re down there, in the dark. We have no sense of time, he said. Divers and astronauts are also susceptible to the effects of DCS, or decompression sickness. “Although they won’t tell you, astronauts get bent all the time,” he said. While divers are more susceptible to DCS in the spine, astronauts tend to get it in the brain.” He also mentioned the vulnerability to PFOs and fluid distribution. 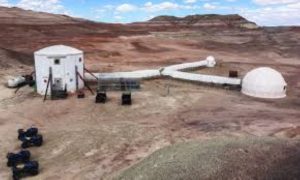 The Future of Exploration in Space and here on Earth:

As Dituri closed on the future of space exploration, with the complications of NASA and private companies colliding with the school of, “old thought,” and the problems arising with time constraints and policies, he is also optimistic. “I’m going to space for sure (he crosses his fingers). I’m part of the first civilian astronaut group – so, that means non-NASA civilian astronauts and I graduate this December with all of my astronaut training… Now, do I think I’m going to do the 3 to 4-year mission to Mars? Nah, that’s not me. I understand I’m a little older than the average person. My job is to train others to get to space and hopefully, to Mars. I also think that my work with an idea for an evacuation plan for the international space station will help me get there.”

During questions, Dituri is asked, “how, as divers, can we push the ball forward for deep sea training and space exploration?” He replies “Talk to congress. Tell them that you want us to go to space. They are here to listen to us. Their job is to take what the public is telling them and to present it the best they can to their audience.” He also digresses. What about what we haven’t explored here on Earth? He mentions only three people that have been to the bottom of the Mariana Trench. “We haven’t even explored our own planet, let alone space. There are so many things that are being discovered in the deep sea including answers to diseases, different fish and corals that can adapt and live in harsh environments and more.”

To find out more about reaching out to your local representative, visit https://www.commoncause.org/find-your-representative/. To hear from Dr. Dituri himself, visit our Facebook event page.

Dr. Dituri is a retired Navy Diving Saturation Officer with 28 years of service to this great country. He retired in 2013 and went back to school to earn a PhD in Biomedical Engineering from the University of South Florida; that allows him to perform research on hyperbaric medicine and diving related maladies. He sits on the ABS committee for building Undersea Vehicles and Hyperbaric Systems and is the author of numerous text books and peer-reviewed research articles. He’s also a highly requested speaker and lectures regularly throughout the world. He’s an Instructor through the International Board of Undersea Medicine. Dr. Dituri is Chief Researcher for Undersea Oxygen Clinic in Tampa, Florida.