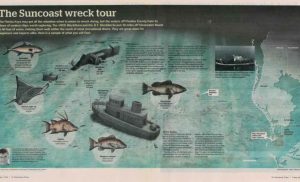 On Sunday, Jan. 31, Adventure Outfitters is chartering one of Captain TJ’s boats from 2Shea Charters for a 3-tank wreck dive! In order to beat the crowds, we will leave early that morning, hitting spots including the D.T. Sheridan, USCGC Blackthorn and the Seafood Barge.

One of the popular dive sites we will visit is the Sheridan, part of the Pinellas #2 Artificial Reef Site and roughly 22 miles out from Cleawater sitting in 75 to 80 feet of water. The behemoth 383-ton, 18-foot long ocean tugboat sunk in Nov. 18, 1986 and is now home to many species of fish including Florida’s beloved Goliath Groupers. This site is a photographer’s dream, a spearfisherman’s dinner and a recreational diver’s delight. The ship is virtually intact with a superstructure that rises 35 feet off of the ocean floor attracting a variety of pelagic fishing including cobia, amberjack and mackerel as well as a few bottom dwellers including gag and red groupers who lurk nearby.

Another ship we will visit is the 180-foot U.S. Coast Guard cutter, the Blackthorn. Beginning its service in 1944, this boat has a long a prestigious career serving throughout the Great Lakes and the Pacific. On Jan. 28, 1980, it was leaving the Tampa shipyards en route to Galveston, Texas after being dry-docked for about four months when it collided with a much larger tanker called the Capricorn. The Capricorn’s large anchor dragged the Blackthorn backwards and 23 men from the Blackthorn lost their lives that evening. On July 30, 1981, the ship was blasted and buried less than two minutes from the Sheridan, making this the perfect dive excursion. Between hurricanes, storms and the initial burial, the Blackthorn is in rough condition, with many parts strewn about with several interesting piles of rubble and debris to explore.

About 300 feet from the Blackthrorn’s rudder lays a largely intact “Seafood” barge wreck – also known as the “Sugar” barge. This 175-foot barge is popular among fishermen often habitating Mangrove Snappers, Cubera, Hogfish and grunts in addition to several other fishing including groupers, Amerberjacks and Cobia. This is a must-see when visiting the other two wrecks nearby.

To reserve your spot, visit the event page here.

The trip includes a divemaster guide.